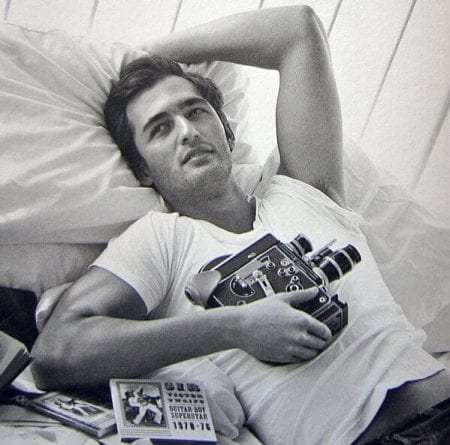 Jason Silva is the host of the Al Gore funded Current TV & one of Bruce Weber’s muses for the latest Abercrombie & Fitch campaign. Silva recently signed with CAA (Creative Artists Agency), one of the most prominent talent agency in the world; he has a number of projects in development for several networks. (For more on Silva, see my earlier conversation with him on Nanomodernity’s Epicurean Challenge).

“A new, wide eyed and freshly minted vision surfaces: as a species we are just now in the process of being reborn. Insights abound, awareness rebounds, and shackles are being untangled, we might, if all goes well, be free. Free of our genetic heritage and free of our biological roots, free to soar into a promisingly magnificent future, the future of commingled information, of interweaved sensation, of co-opted dreams.” — WildCat, SpaceCollective.org

A while back I read a Newsweek article about the space program that really resonated with me. The article, titled ‘Rocket Men,’ written by Jeremy McCarter, spoke of the importance of artists in the effort to re-ignite excitement about space exploration. It mentioned an idea by Buzz Aldrin, from his memoir, Magnificent Desolation, in which he made an “intriguing suggestion: Send an artist into space.” The author of the Newsweek piece went on to say that what is needed is a true “Romantic hero for our 21st-century space adventure” …and that we “might need a little star power to make it out to the stars.” The point here is this: big ideas need to be packed in a thrilling, sexy, emotionally-appealing way. In the case of space exploration, the author eloquently puts it like this: “NASA itself needs to help the public grasp that sending human consciousness 40 million miles into space can be its own mesmerizing reward….”

I think this very same challenge applies to those working in other areas of cutting edge scientific exploration: Synthetic biology, genetic engineering, stem-cell research and beyond. We need to help the public grasp that enhancing humanity, merging with our technology, extending our lifespan, reaching for the infinite, really, is its own reward. It is the most magnificent of undertakings. Some have said “design is becoming imminent to being”. Freeman Dyson said, “In the future a new generation of artists will write genomes with the fluency that blake and byron wrote verses”. Technology and art go hand in hand. The artists’ paintbrush is a technological instrument. The artistry of Mozart or Bach was made possible by the technology of musical language and musical instruments… Technology serves as a tool for human flourishing.. creativity is funneled through our technology.

Richard Holmes’ fascinating book, “The Age Of Wonder,” explores the late 18th century, or as the author refers to it, “the romantic age of science,” a time when the scientists were poets and the poets knew about science. What scientists and artists shared then, and what we need to regain now, is a fascination and love affair with what Holmes calls “the exploratory voyage.” We need to create mythological narratives around science and the implications of exponential growth in technology. The Singularity and what it means should be explored with astonishing artistry… & this is what I’m doing with my documentary Turning Into Gods. [More on Silva’s ideas concerning art, design and science]—