Jewish and Goyish in Berlin 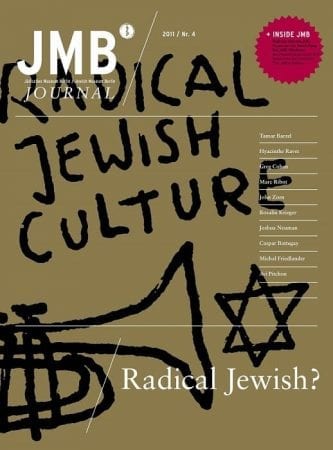 Last weekend, as per the recommendation of my friend Prof. Michal Bodemann, I visitedRadical Jewish Culture at the Jewish Museum Berlin (Jüdisches Museum Berlin). In fact, I accompanied Prof. Bodemann, the author of a number of critical texts on Jewish cultural history in Germany – including Jews, Germans, Memory. Reconstructions of Jewish Life in Germany – on my first visit to the JMB.

The title of the exhibition, Radical Jewish Culture, refers to an avant-garde movement that grew in the New York underground music scene, in the early parts of the 1990’s. Jewish musicians such as John Zorn, Anthony Coleman, Frank London and David Krakauer explored the possibilities of creating a new form of Jewish music, thus “emancipating themselves from conformity and inconspicuousness.” Klezmer played a central role in their investigations which were infused with elements of free jazz, rock, blues, punk as well as experimental music.

The show, once again, made me think of a subject which has consumed me for a long time: how does one curate sound (and) music? The challenges of presenting time-based arts – performance, poetry, theatre, story-telling, dance, cinema and yes, sound and music – have been on my mind for well over twenty years. As a former student of theatre and a perpetually aspiring documentary filmmaker, I have always been intrigued by the challenges of presenting these fluid and non-tangible arts in the austere and unyielding spaces that are designed for purely static visual forms. Even years of academic institutionalization has not tempered my inquiries into presentation of… be it writing or producing a play or curating an exhibition on music and poetry, for example.

By the way, how does one engage cultural patrons to invest in non-tangible, time-based art forms? Yes, I am digressing… but, only a bit!

In any case, back to Radical Jewish Culture and the great difficulties of orchestrating an exhibition of multiple sound installations in the severely academic space of a museum: in case of the RJC, the JMB has done a sound job (excuse the pun) taming the concrete and un-yielding walls of the museum’s galleries. By employing simple technologies – headphones, sonically isolated video rooms, continuous playing musical tunes and the uses of reflective and absorbent wall coverings – the show’s organizers have managed to present their subject’s social, historic and aesthetic complexities in a lucidly engaging form. Throughout the exhibition, the sweet sound of Klezmer music softly reverberates off the austerely static (Daniel) Liebeskind-designed walls of the galleries.

Radical Jewish Culture is a seemingly simple exhibition which leaves one desiring for more only because it does so much to whet our appetites. The show presents a broad introduction to RJC, yet, in a great part remains (a little too) focused on the oeuvre of the highly prolific American composer, John Zorn. Perhaps because of his work’s affiliation with German history – Kristallnacht (1993), in particular – Zorn is presented as the main star of the show.

Kool-Aid is goyish. Evaporated milk is goyish even if the Jews invented it. Chocolate is Jewish and fudge is goyish. Fruit salad is Jewish. Lime Jello is goyish. Lime soda is very goyish.