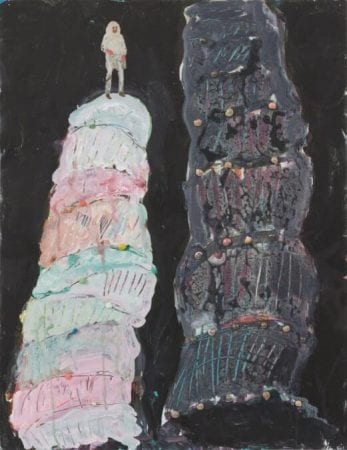 Rik Meijers’ paintings are unforgettable. Love them or hate them, it is not possible to mistake his spirited compositions and untamed style with any other painter’s work. I first met the Dutch artist, early last month, at the opening of his  joint exhibition with Jeroen van Bergen at the Bonnefanten Museum, in Maastricht… Meijers is represented by Friedman Benda, in New York City, where his show Rik Meijers: I am still what I wanted to be is on view until May 28th, and in his native Netherlands, by Aschenbach and Hofland Galeries, in Amsterdam.

Homa Taj – Who are the characters (I prefer this to figures) in your paintings? Whores, junkies, drunkards, etc … I mean, do they actually occupy a place in your concrete world picture or are they simply subjects whom you curiously explore?

Rik Meijers –Sure I have met, and continue to meet, quite a few of these characters in everyday life but the mentioned characters in my paintings are all constructed, like in myMystical Portraits, they appear by combining totally different images and drawings on top off each other with only the eyes and mouth in about the same position. They only “come to life” in the paintings. These paintings give a face to those on the edges of society, an identity that releases them from anonymity. Martyrs, saints, prophets, mystics, bums, have-beens, vagrants and drop-outs …they are all people like you and I with their own shortcomings.

And, they may look wild and somehow dopey at the same time but it is impossible to determine where these rootless figures belong. Young, old, white, black… whatever they may be, they are outsiders, all by themselves in an infinite void.

HT – Writing about your work, Bonnefanten Museum’s Alexander van Grevenstein explains, “The ‘innocence’ of Lucy in the sky with diamonds is miles away. Lucy appears to have become mixed up with some sort of voodoo ritual…” What happened to Lucy?

RM –Uh maybe you should ask Alexander this, but the sixties are gone and with that some innocence may have gone too. I don’t know about Lucy for sure but I guess she is like a wandering soul, wanting to escape her life and attempting to flee from isolation, in search of redemption and enlightenment.

HT – One of my favorite works in the Bonnefanten exhibition is the pair of black and white, large-scale baby bonnets. They are so perversely beautiful. They look as if you are taking the notion of the ‘loss of innocence’ to its most (il)logical end. When did you lose your innocence? I know when I lost mine…

RM – I think I am still quite innocent or maybe I never was from the start? 1993 though was a bad year, my younger brother and father died shortly after each other and this made me question things, especially my art. It made me come to the conclusion that if I were going to continue with painting it would have to be about things that did have a meaning. Not in an academic way but more on a personal level, my art should have meaning to me regardless of what others thought or said about it. It made my art become more painful to myself in a way but also more rewarding in the end. It became a call for respect for failure and appreciation of mistakes and an invitation to reconsider the difference between winners and losers. The above mentioned paintings with the baby bonnets make me think about the person who decorated them with stones and beer bottle caps, the person who drank the beer from the bottles and about the babies that are supposed to be wearing these bonnets.

HT – … What about the spaces that your characters occupy? Where does Lucy live if not in the sky?

RM – Since the diamonds in the sky have turned to stones, my characters are more earthbound, they are trying to survive in a world that abjures them. The figures are usually presented as isolated shapes against a monochrome background, as in an icon or an emblem.

HT – When did you start to tar and feather your characters? How did this process come about… ? What does being tarred and feathered mean to you?

RM – I started using tar and feathers in my paintings around 2004. Tarring and feathering is an old method of physical punishment and humiliation used to enforce unofficial justice or mob revenge. Tarred and feathered, these figures are exiled from the community, they are driven out of town and left to their fate. Still they are not dead and at this point I become interested in how their lives are going to continue, how do you go on from there? Can you go on? To give them a layer of gold paint for a start seems only fair to me.

HT – What is it like to have your work shown (at the Bonnefanten Museum) alongside Jeroen van Bergen’s? His creations are quite seemingly (!) tempered and sober…

RM –That is Alexander van Grevenstein’s idea. It certainly is maximum contrast.

HT – I personally loved the curatorial notion of ‘mood swings’ in which visitors are invited to participate… What did you think of this emotional/spatial museological choreography?

RM – It does work in a strange way, as your mood swings from one room to another, the works don’t get ‘infected’ but stay very clear and keep their own opposite positions.

HT – Let’s talk music – since I am strangely (I think) very sensitive to music and sounds in general. You play the guitar in a band. Talk about your music…

RM – I started playing guitar and singing in a punk band as a teenager, and continued to do so until now, with some major breaks in between. The band rehearses once a week in my studio and does occasional musical performances, often to coincide with an exhibition opening like at the Bonnefanten. I may be a lousy guitar player but the punk movement taught me that things don’t need to be complicated, that meaning and directness is everything. I like this self-sufficiency, rawness and fundamental simplicity very much and see this also in outsider-art and underground fanzines for instance.

Also, as an artist, I enjoy the dubious privilege of being allowed to make a fool of myself.

HN – So, how does music figure in your paintings? Do you have an actual or an imaginary soundtrack as you work… or, do you prefer silence?

RM – I listen to music a lot in my studio, from country to punk rock, with a lot of anti-folk in between. Sometimes it helps to hear one song being repeated for an hour or so, it than becomes kind of meditative and creeps under my skin.

HT – Your exhibition in the Netherlands, at the Bonnefanten Museum in Maastricht, opened on April 17th. Four days later, you have your first show in New York, at Friedman Benda, which will be on view until May 28th. How do you experience the differences in perception between Dutch and American audiences? And, what about among collectors?

RM – The differences in perception of the Dutch and American audiences are not very big in my opinion. The idea that the Dutch are less conservative seems to be a bit out of date, things have changed a lot in The Netherlands over the last 10 years and not for the better unfortunately. Also the American collectors (as far as I encountered) seem to be less conservative than assumed. There is always an audience that is interested in art and that is really into it and another group that is absolutely not (or not yet).

HT – Has your visit and exhibition in America sobered you up?

RM – I don’t think so, at the Friedman Benda opening there was beer and wine afterwards, so that didn’t sober me up. It was pleasant working with the gallery staff, and the opening was a great event with Chomain Vasser and me doing a few songs …and New York’s own Jeffrey Lewis performing a small live set. Yesterday I heard that Jeffrey recently made an album with Peter Stampfel who named his band The Bottlecaps…. coincidence or not? Sometimes things fall in place all by themselves.

RM – Next up for me are some recordings with the new band, a new series of paintings to be started soon and I am looking forward to be showing my work more often outside The Netherlands. As for Lucy, who knows… maybe she moved on searching for something else and probably still not finding it.