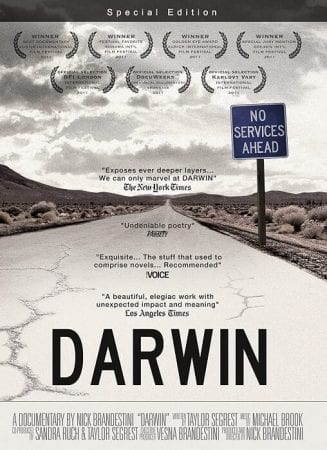 LONDON – I first heard about Darwin at the Zurich Film Festival where everyone was raving about this documentary by a young Swiss director. In fact, the film won the Best Documentary Award at ZFF, followed by another (BDA) at Austin Film Festival, later in October. Since its premiere at the Santa Barbara International Film Festival in January (2011), Darwin has been receiving great reviews from critics around the world, including one (Variety) with which I wholeheartedly agree: “Undeniable poetry.” It wasn’t until London (55th BFI Film Festival) that I had the chance to see Darwin and meet Nick Brandestini …

Homa Taj – How did you hear about Darwin?

Nick Brandestini – I was interested in making a documentary film about a small, isolated community in the desert. My co-producers Sandra Ruch and Taylor Segrest, whom I met at a film festival and whom I wanted to work with, actually found the town of Darwin while researching on the Internet. My initial choice of a desert community turned out to be too small to make a feature film about. So this is how it all started. I did not know at the time what the film would eventually be about. This all became clearer during filming.

HT –  What inspired you to make a film about it?

NB – For some reason, I was always fascinated with the Wild West and Ghost Towns. I made a few short documentaries before in Europe, and I wanted my first feature length film to take place in the US. My main inspiration was to learn more about the people who live in a place like Darwin. I love the environment of the desert, but could not understand why anybody would want to live there, away from everything. After making this film, I understand much better.

HT – How did you, as filmmaker, configure the narrative, the story of your film that is the portrait of a place where nothing happens?

NB – The fact that not much happens in Darwin was indeed a bit of a challenge. When you enter the town for the first time, you think it is an actual ghost town with no people in it. One of the few interactions the 35 residents have takes place at the post office when they pick up their mail. But not all go there every day. And the only major event where most of the town comes together is at the 4th of July celebration, which is also in the film. I think it is quite an emotional scene that illustrates or symbolizes the Darwin residents’ independence and own way of life.

During the making of Darwin my co-producers and I were constantly discussing how to shape the film. There were a lot of interesting individual scenes that we could work with, but not a single story that would involve all the residents. After a while we found that these scenes all dealt with similar, larger themes such as “religion”, “family relations”, “war & peace”, or “death.” This is why the film is divided into different chapters. And I think the film has a poetic or philosophical tone, without being too obvious about it. At least that was the intention.

HT – I understand that you self-funded the film so you didn’t have to worry about selling the idea of making a film about an uneventful ghost town with a population of 35. Aside from your beautifully handling of this apparently mundane subject, I am really touched by the fact that perhaps your film may not have been made 15-20 years ago, in the pre-digital age.

NB – While the film seems to have high production values, it is actually a low-budget film. Darwin also had a very small team. The core team consists of basically 4 people. And like you say, the film would not have been possible even 10 years ago. Today’s technology really helps filmmakers bring their visions to life. You don’t need to have expensive equipment anymore to make a film. The relatively small camera that I used (a Sony PMW-EX3) created great high-definition images that look very nice even on a big screen.

HT – The town’s population is comprised of a motley crew of characters. And, I mean that in an affectionate sense. Yet, you portray them without really judging them…

NB – I did not expect the people of Darwin to be “dangerous” or “crazy”, as some people would characterize them. I always wanted to portray the people of Darwin in a balanced way. Of course, I wanted to show some of the more eccentric and unusual aspects of the community too, but not focus on them. I was more interested in hearing the people’s stories, why they are in Darwin and what they like about it.

HT – How did you convince the residents of your good intentions to do a documentary on their town? Especially considering its somewhat poor reputation…

NB – Well, I was very careful not to rush things. And I really did not want to invade their lives too much. I think many people in Darwin are there because they prefer to be left alone. But I got along with the residents very well and they were very nice to me. And I think it also helped that I was from a foreign country and that the film crew consisted of just me.

HT – There is a navy base located near Darwin which, metaphorically speaking, feeds the town’s residents with some kind of apocalyptic fever…

NB – Yes, the next-door Navy Base clearly has an effect on the Darwin residents. Their water actually comes from a spring that is located on the base. The fact that nobody really knows what is happening there certainly feeds all kinds of speculation. Some people in town are quite matter-of-fact about it though. Monty for example says: As long as they don’t bomb my front yard, I have no problem with ‘em. And in fact, the relationship between Darwin and the base is generally quite good, even though some residents naturally feel bad vibes from its presence.

HT – Would you live in Darwin?

NB – I like to visit the place, but I could not imagine living there for longer periods of time.

HT – Have you been back since you finished filming?

NB – I have been back to Darwin to show the residents the film. It was a special premiere of “Darwin” in Darwin. That was in May 2011. It was one of the highlights of the “Darwin adventure.” I am very happy that the people of Darwin liked the film. I really wanted to create something that they approve and can also enjoy. In fact, they were laughing at the humorous moments like every other audience. In addition, they learned things about each other that they did not know before. I had a great time in Darwin and I will return again in the future.

HT – Where is the film showing next?

NB – The festival run of Darwin is beginning to slow down a little bit. However, I get quite a lot of invitations to submit the film. If a festival would like to screen it, I usually send them a copy. I am now also trying to get TV stations interested. And, I think there might be a theatrical run in my home country of Switzerland.

HT – What is your next project?

NB – That is a good question. I don’t have a specific one at the moment. I do however have a few ideas. And, for me, there are some “ingredients” the new project should have. It will probably be about people, and less focused on one single issue. I would also like the film to have a cinematic environment that is nice to look at. And, hopefully it will also offer opportunities for humor.