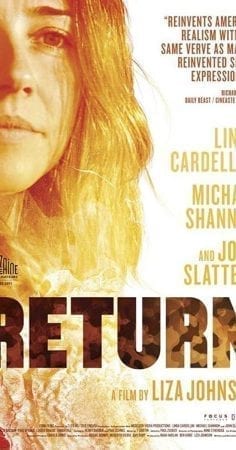 I met American performance and video artist turned filmmaker Liza Johhnson at the Mayfair Hotel during the 55th BFI London Film Festival. Her film Return premiered at the Cannes Film Festival 2011, and is included in the Museum of Modern Art’s annual The Contenders series.

Homa Taj – You have been working as a professional and successful artist for many years. How did you figure the transition between your work as a visual artist and directing films?

Liza Johnson – The art work that I have done has always been on film and video. So, (because of this), the tradition that I studied came out of conceptual and performance arts. It’s a very different tradition but for me there has always been a lot of points of contact.

HT – How long was the development period for Return?

LJ – I don’t know. I wrote the film and then we workshopped it at Sundance (Film Institute Screenwriters’ Workshop). Then I rewrote it. And then we went out to investors …one or two days before the economic crisis of 2008 which was not an awesome time [laughs]. But, at some point, maybe 1 1/2 years later, I am not exactly sure, at a certain point after that we met the right partner – financially speaking. So, I am not sure if that is actually longer than my peers and colleagues. Sometimes it just takes time to find the right partners. I don’t know if we were delayed by the economic crisis or if it is just hard to find the right match for your project.

HT – How was working on Return different from your earlier video work?

LJ – Working with an economy of means, we shot the film in 25 days and tried to make an opportunity for beautiful accidents and ephemeral effects.

HT – How did you come up with the idea of making a film about a soldier returning from war, etc…?

LJ – I had a friend who told me stories about his efforts to stay married after his military deployment. And, I don’t know how it is here in England, but in the US mostly when we talk about war as a public conversation … people talk about statistics. For example, “63 people died in a car bomb, etc.” Though my friend actually doesn’t have PTSD (Post Traumatic Syndrome Disorder) since his training made it possible for him to assimilate some very difficult things. But he could not describe what he went through to his wife. And, she could’t understand what he had gone through without his help. So they just could’t cross that gap. It was through him – meeting his friends and acquaintances – and by doing research on my own, I heard about experiences that were dramatically different from one another.

HT – Aside from hearing your friend’s stories, what ultimately inspired you to want to make a movie whose main theme is war?

LJ – Ultimately, I think that because of TV and policy conversations (on popular news programs) it wasn’t so much about watching other movies that made me want to look at the issue of war in a different way than how people talk on (American) TV.

HT – Doing film and performance art is very different from doing a long feature film, though…

HT – As is writing a screenplay which, again, is a very particular form of storytelling…

LJ – Yes, it really is. Actually, Sundance really helped me because they have these workshops where you work on your scenes and people speak in a different vernacular. The economic context is totally different. And, basically, how you work is different.

LJ – Well, for example, in performance and in conceptual art, the working question is: “What does this mean?” In narrative work, the question is, “What happens next?” Or “Who am I?” “Where have I been?” So, it’s also a very different way of talking about what you are doing. And, ultimately, a very different method of working.

But the grammar of my recent work is not so different. And, because the work I have been doing is very relational working with non-actors… some of the aspects are organically linked. But you are totally right.

HT – What percentage of your crew in Return is made up of non-actors?

LJ – Oh, for the film, all the actors are experienced. Though I do like working with non-professionals, in this film we mostly worked with Union actors – except for a few very small roles.

HT – The experience of War never ever leaves you. No, I didn’t serve in an army since I was very little [both laugh] during the Iran-Iraq War but… it just stays with you… That feeling of… death.

HT – I think that it actually affects your DNA [laughs]… So, it’s fascinating what you have done with the film.

LJ – I have a few projects … I am about to direct something that I haven’t written which is something I have never done. I also have a script that I wrote before Return. And, I have a couple of literary properties that I hope to adapt.

HT – What about your career as a traditional visual artist?

LJ – I think that I can keep working in that tradition also. For example, in the summer, I shot a film in Australia with non-actors and it is much more of a neo-realist project where as a group we did a workshop with a friend who has worked there for a long time. He is an anthropologist… almost like public art considering how would the group feel best represented, what stories did we want to tell, and how that all came together. And, then we acted it out. So, that project is almost done. And, I am hopeful that I will be able to do both kinds of work.

HT – Where are you going to show it?

LJ – I don’t know it. We only just finished cutting it.

HT – Who is your dealer?

LJ – I don’t have a gallerist. If you want to suggest one, I’ll go meet them [laughs].