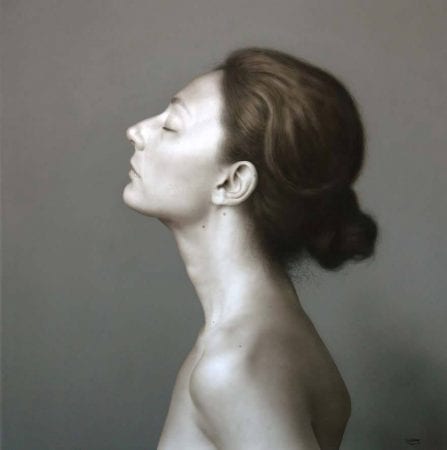 Homa Taj – What inspired you to become a painter?
Bernardo Torrens – It was more a matter of what I didn’t want to be. At some point, the only activity that gave me some pleasure was drawing, and later painting. It was not a real choice and until that moment art was not an option. No one in my family or friends was involved in the arts.

HT – Why photorealism? Asid from the fact that you are an exceptionally talented figurative painter…
BT – Again, at the beginning, it was not important. I remember a show in Madrid, I can’t tell what year it was, called, more or less AMERICAN REALISM or something like that in the very early 80’s. I was shocked by some of the paintings and their subjects. I can remember perfectly a Chuck Close portrait, huuuge. It was for me something extremely new, fresh, never seen before. You have to realize how difficult it was, at that time, to have information about what was going on in the US. I guess it was somehow inspiring.

HT – Why choose monotonal (or black and white) palette? It’s very photographic…
BT – I like to call it achromatic and, yes, it looks quite photographic, at first glance, but under good natural light conditions you can see big differences in all the tonal grays, cold, neutral and warm which creates the sense of color. In fact many people remember some of my achromatic works as full color ones.

HT – You paint mainly women, female nudes… Have you been commissioned to paint anyone – a female nude?
BT -Yes, and in these few cases the result has been extremely interesting in so many ways.

HT – How about portraits, you have done some commissioned portraits including the former President of the Spanish Parliament, Mr. Felix Pons. Are you still accepting portraits…?
BT – And recently also the portrait of former President Jose Bono. These kind of work I very rarely accepted, but I do accept commissioned portraits from anonymous people. I only ask for one thing: I have to be absolutely free to do what I want to do and the person has to think more like they are going to be one of my models for one of my paintings rather than commissioner of a classical portrait, which I don’t do.

HT – I think their Royal Highnesses King Felipe VI and Queen Letizia need to have their portraits done by you? What do you think? And, a pair of their daughters?
BT – Hahahaha I don’t think so. After the experience with Antonio Lopez Royal Family portrait I’m sure they will prefer a selfie!!

HT – You have a show opening at Bernarducci Meisel Gallery in NYC, at the start of November. What new works are you showing? How is this show different from other (IF it is….)?
BT – It is an end and a beginning. At least that is my feeling. I am showing new color works after many years working only with achromatic works, and a really new kind of works: watercolors on polyester. This is something I want to continue exploring in the future as color works as well.

HT – Who do you use as models? Professionals only?
BT – Not only professionals, I am open to finding new models, always and everywhere.

HT – How long does an average (say? 4×6 feet) painting take you to paint?
BT – I paint as fast as I can. For me time is not a plus. If I don’t do it faster is because I can’t. Also, I don’t have assistants and I don’t use shortcuts, I just paint my works by myself. So let’s say a work like “The Three Graces” (see below) took me 7 months.

HT – What is your work process like? Do you go to the studio – in Madrid? – during regular hours every day? Do you listen to music? Etc…
BT – It really depends a lot on my mood. Some times too much… Some times I have a mental blackout and believe me that is scary, and there is not too much you can do. And sometimes time flies and I work as if I were 30 again. And I never listen to music, it creates something like a soundtrack in a movie and improves the feelings in front of the works, and can make you make mistakes, or think it is better than it is.

HT – Where do you find inspiration … (visiting a museum? listening to music? making love? etc….)
BT – “Inspiration is for amateurs.” (Chuck Close)