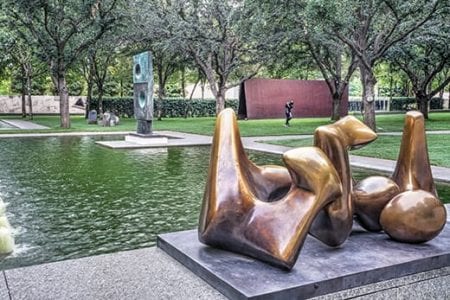 Late in May, I had the pleasure of meeting with Jeremy Strick, Director of the Nasher Sculpture Center in Dallas, Texas. A native of Los Angeles, Strick spent nearly a decade leading Los Angeles Museum of Contemporary Art (LA MoCA). Early in 2009, he was appointed Director at the Dallas-based museum which is one of the leading institutions of its kind in the world.

During our long conversation, we spoke about Dallas as a remarkable example of collective patronage; the place of sculpture in today’s digital world; and the First Annual Nasher Prize for Sculpture.

Homa Taj – You were at LA MoCA for a long time, about nine years. What was the transition to Dallas like – aside from the weather?

Jeremy Strick – Well, you know, it has actually been somewhat easy. Dallas is a very welcoming place. Also, physically speaking, the city reminds me of Los Angeles where I grew up.

HT – Dallas like Los Angeles and unlike, say New York, has a lot of breathing room …

JS – That’s right. It has a lot of spatial breathing room and it is a city that is in the midst of transformation. It’s becoming something … and that is very familiar to me. And, it’s a very easy place to arrive where you are welcomed.

HT – Do you work with the Dallas Museum of Art?

JS – The Dallas Museum is right across the street from us. And, so yes we have a very close relationship with them. We are actually a triangle of (three) museums, including the Crow Collection of Asian Art.

So it’s a very nice group of institutions that are in close proximity and create a rich environment.

HT – You are located in the downtown art district. This is somewhat unusual for a sculpture center.. because they’re often created out of town.

JS – I am told that when Ray Nasher wanted to create a sculpture garden – when he approached Renzo Piano – he had initially thought that it doesn’t make sense for a sculpture garden to be downtown and that it needs to be outside the city. Of course, he later came to embrace the idea that the garden can be in the city center. And, I think it is one of the critical features of the Nasher Sculpture Center’s identity. Our building is 55,000 square feet and our garden is about 1 1/2 acres. So, the idea of having this huge garden in the middle of the city that comes to serve as a place of rest, of meditation and, of course, of learning is wonderful.

HT – Yes, that is remarkable because when we think about de Cordova (Massachusetts), Storm King (New York), Kröller-Müller Museum (The Netherlands), Fondation Beyeler (Switzerland), Louisiana Museum (Denmark) … they are all out of town.

JS – Yes. But on the other hand, when we look at the Art Institute of Chicago, and the same thing obtains in the New Whitney, there are these moments where there are huge windows facing the city and sculpture is placed within those galleries… these moments hold up the idea of sculpture in the urban context.

And, I think that a lot of sculptures are created by artists who are urban creatures and their work reflects modernism and of course, one of the symbols of modernism is the urban environment. And, I think it works.

HT – Remember when it was said that “sculpture is that which you bump into when looking at a painting”? That is no longer the case. And, I think having these types of institutions that put particular focus on sculpture and three dimensionality of sculpture in the digital age have really helped shape the place of this art form.

JS – Certainly. It may be less true today with all the art fairs, and the audience for contemporary art is now quite vast. But it’s also true that people feel intimidated, they feel that they are not getting the art – or the environment of the museum. I find that a garden is a wonderful medium that helps eliminate the sense of distance and alienation that visitors feel in these institutions. People feel very comfortable relating to works … and, they are willing to take the art in its own terms. And, so there is something about the garden setting that really encourages it…

HT – As opposed to a sterile environment or, even one that is systematically intimidating.

JS – I think you are right. Having three-dimensional objects help. And, I think having an environment that is respectful and comforting helps to welcome art audiences.

[Tweet “I think having an environment that is respectful and comforting helps to welcome art audiences. Jeremy Strick #NasherSculptureCenter”]

HT – Yes. I see museums around the world trying to reach out to new audiences by using social media. So, people look at paintings, for example, and think that they have already seen them on their iPads or on the Internet, etc – of course, they haven’t seen them but it’s easy to assume…- Sculpture, however, defies two-dimensionality. Unless, you look at the works in 3D – and, certainly, not even then. So, I think it would be wise if more museums used their sculpture collections to attract people to really dynamically engage with art. It’s better than continuing to promote museum selfies as an engagement tool…

JS – I think one of the reasons Ray Nasher wanted to create a sculpture garden and museum was because sculpture was still a neglected art form. Right now, of course, it is a having a great moment. And, I think it’s because much of our experience with media is two dimensional, as you say…

HT – When I worked at the fine arts library at Harvard … some scholars would joke that someday we’ll all become fuzzy (ditigized) art historians. We laughed. But, the joke has taken on a very serious face. That’s why I think sculpture is so important. Not just because of its 3-dimensionality but, in case of some, its size which makes it very difficult to ‘collect’. So, again, having these types of works – say monumental sculpture – which even major collectors may not be able to collect and displaying them in an urban environment is quite invaluable.

JS – That’s right. Artists, and sculptors in general, have a special feeling toward the natural environment. Think of Storm King, because it requires space for meditation, these become extraordinary places.

[Tweet “Artists, and sculptors in general, have a special feeling toward the natural environment. Jeremy Strick #NasherSculptureCenter”]

HT – Let’s talk about collecting – well, more like patronage: we talk about monumental sculpture that has a very small collecting base. But, there is also the underwriting of costs for acquisition or installation of works in the public museum context. How would you define Dallas as a community of arts patrons – as opposed to Los Angeles, or even New York? New York, for example, is terribly market-driven…

JS – Well, I would say that Dallas is a very special place. Very particular – like every major city. But, in Dallas, there is a collaborative spirit. For example, in 2007, three major collectors in Dallas donated a large number contemporary art works from their collections to the Dallas Museum of Art.

Other collectors have bought things together for museums. That is quite unique. And, it is one of the things that has delighted me about working in this environment.

The Nasher was founded by a single family but members of the community have reached out to us. Not to diminish the great philanthropy that takes place in other great cities in the country, but there is something very special about Dallas.

HT – Is this Texas Pride?

JS – No, I think this is a Dallas phenomenon.

HT – I was actually thinking of, for example, collectors in Cologne who wouldn’t buy art in Berlin – unless, it’s exhibited at, say, Art Cologne.

JS – I think that people in Dallas want their city to be great. And, they believe that

The arts provide a way to enhance their community. And, they are very deliberate about it. So, again, these are the ideal conditions for an art museum.

HT – That brings us to the International Nasher Prize for Sculpture..

JS – When Ray Nasher decided to create the museum, he wanted to provide an absolute optimal condition for the works on display. But, I think his ambition was that this would become more than a repository for art. He had stated that sculpture is somewhat overlooked. And, that it should be at the center of understanding modernism, via scholarship, etc.

So, three years ago, we were working on the Center’s 10th anniversary so we commissioned ten artists to create works around the city. And, that got us to think that there are so many approaches to sculpture. Not just in terms of style and medium like, sound, photograph, installation and various other media…

HJ – So, you define sculpture in a very broad sense?

JS – That’s right. The anniversary event was a great opportunity for us to reconsider what sculpture is? What are its parameters and so on? What are the great achievements in the field? And we realized that sculpture is so very varied, at this moment in THE history [of art]. And, that there are so many different approaches to it.

We thought that it was an opportune moment to consider these achievements and advances on a regular basis. There has not been a single international prize for sculpture. There are several prizes that include aspects of sculpture but nothing annual that would involve the discussion of the field. And, with what we are doing, the process is as important as the prize. We start with asking 100 nominators from around the world each to nominate a single artist. The goal is to give the prize to a living artist with a significant body of work, who has advanced our understanding of sculpture. Nominations are gathered and presented to a jury of seven distinguished individuals in the field.

I think it is a very strong group of jurors who are going to review the nominations and determine who will receive that award.

HT – So this is the first international Nasher Prize for sculpture. When will it be announced?

JS – It will be announced in the fall of this year. And, we will celebrate the first recipient, on April 2nd, 2016.

[Tweet “Nasher Sculpture Prize will be announced in the fall of this year & we will celebrate the first recipient, on April 2nd, 2016.”]

HT – Are you going to televise it – like the Turner Prize? Or, the Academy Awards?

HT – A producer friend – who works predominantly in 3D – told me that since both my films (The Dealer & Rene The Movie) deal with sculpture, I should film them in 3D. I think he may be right [laughs]. So maybe, yours will be the first award to be televised in 3D!