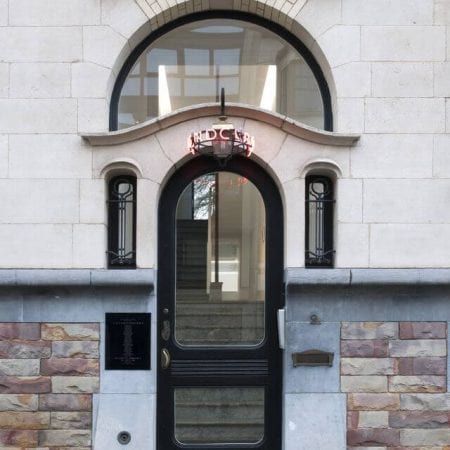 Meessen De Clercq was founded at the heart of Brussels, in 2009, by Belgian dealers Olivier Meessen and Jan de Clercq. When I visited MSSNDCLRCQ’s exhibition at Art Cologne, what struck me most about their installation was its quiet, poetic and graceful aesthetics. Meessen De Clercq’s roster of international artists includes: Ignasi Aballi, Jordi Colomer, Hreinn Fridfinnsson, Ellen Harvey, Jorge Méndez Blake as well as showing works by Jonathan Monk and Bruce Nauman. The following is an excerpt of my conversations with Jan De Clercq which began during our initial meeting, early last month …

Homa Taj Nasab – How did you and Olivier meet?

Jan De Clercq – Olivier (Meessen) and I know each other for approximately 10 years. We have friends and family in common and we met at a dinner party where we ended up talking quite a lot… about art which was my interest and Oliver was working for a dealer, at that time.

HTN – How did you come up with your gallery’s logo – which some may mistake for its name?

MDC – The logo consists of our last names without vowels (we only have the vowel “e” in our last names). MSSNDCLRCQ is written in bold typeface so that it can easily be mistaken for a Latin figure. It is our hommage to Georges Perec, the famous French writer who wrote La Disparition, a book in which the letter “e” is not used.

HT – You opened your gallery during the worst economic crisis in recent history, in 2009. What was that experience like…?

MDC – As you can imagine, it took quite some preparation before opening up the gallery, so we did not plan at all that the whole transformation of the building would be completely finished just before the banks starting going bankrupt. We had opened, and (luckily) could not compare with the past. The only option was going forward, and pay attention to the cost side.

HT – Meessen De Clercq occupies a beautiful art nouveau building, in Brussels. Does its historic identity, in any way, influence your installation choices?

MDC – I would not say that the historic identity influences our installation choices, but the physical limits and characteristics of the floor, for example, influence what can or cannot be shown. The entrance door is one meter large, so certain works cannot enter our space (yet), the floors are not straight, so we sometimes have to use some tricks to have pieces installed well … But, in general, artists react really well to the place because it has a certain ‘soul’, and is, by now, adapted to show art on a regular basis.

HT – How do you meet your artists? And, what artistic and personal criteria do you have in mind when choosing to work with them…?

MDC – We meet artists in a variety of ways: from being contacted by, bumping into, or actively contacting them. We do not have a strict list of criteria in mind, but Olivier and I talk a lot about the artistic practice and its evolution before proposing a collaboration. It is partly intuitive, combined with research and informal discussions. In essence it is the strength of their ideas that counts, and how they transform their thinking into art.

HT – What aesthetic qualities do Meessen De Clercq artists have in common? Or, better yet, how do you define your artistic preferences…

MDC – Looking back at the persons we have had the pleasure of working with I would say that, in terms of themes, we have affinity with poetic and sensitive works that are not without humor… touching upon themes such as memory, time and light. These have been well-thought out works that lead to reflection and contemplation, and, often with links to literature. I can even answer less clearly…

MDC – We almost always show video art. We have allocated a special space (Videobox) in the back of the gallery, in which we show only videowork. Video is an important medium for many artists, today, yet it is shown less often in gallery settings. So, the videobox allows us to also show the video part of an artist’s practice. Examples of artists we work with that use video, but not exclusively, are Ignasi Aballi, Jordi Colomer, Hreinn Fridfinnsson, Ellen Harvey, Jorge Méndez Blake…

Furthermore, to put the accent on the importance of this medium, we organised the group show Territories of Time with only videowork throughout the whole gallery. It featured works by Absalon, Ignasi Aballi, David Claerbout, Lieven De Boeck, Sofia Hultén, Alfredo Jaar and Bruce Nauman.

HT – Video art is always attractive to show but fairly difficult to sell. Do you see an emergence of video art collectors…?

MDC – I do not know if there is an emergence, but there are good collectors and institutions around that want to buy good work, and that include video art. It is also up to us to show the relevance of this work in the artist’s practice, and to present it to the general public, collectors and instiutions. I would not say there is an emergence of video collectors, but I do notice that certain collectors who did not use to acquire video work evolved, and now consider it normal to buy video work.

HT – What is the Wunderkammer [cabinet of curiosity]?

MDC – The Wunderkammer has been named like that, because the idea of the curiosity cabinet entailed a space where one could find objects that expressed one’s amazement at the world. This isolated space offered us the ideal environment to show one, and only one, work (or series) that has somehow relates to the solo exhibitions we organize. It allows us to show strong works by artists that the gallery is not necessarily representing, in a meaningful context.

HT – How do you define the collecting community in Belgium? In other words, what (aesthetic or cultural) characteristics differentiate or define Belgian collectors of contemporary art?

MDC – First of all I would not use the term ‘collecting community,’ as there are many individuals and groups with very different motives and convictions acquiring contemporary art. There are many Belgian collectors in various fields, and also quite a number of occasional buyers that are not afraid to buy state-of-the-art contemporary work. You can find collectors who specialize in Chinese art, Russian art, Post pop, conceptual art etc… The most amazing is probably that a small country, like Belgium, has such a broad group interest in contemporary art. The small cultural difference that I see is that Belgians, in general, are ready to decide quickly as compared to collectors from other countries.

MDC – From the beginning, we wanted to be a good platform for the artists we represent. In our eyes, this means that our artists and their work need to get known by a broad community. The means to that end include, for example, publications and participating in fairs. For some artists, producing special/limited editions of texts or their work is a logical and important part of their practice, so we provide them with support to realise these.

HT – What is next for Meessen De Clercq?

MDC – A lot of talk and a lot of action in order to constantly improve the things we do to be a better platform for the artists with whom we work. There are loads of plans for exciting shows, we will be heavily investing in new productions, will try to consolidate our place in the artworld, plan to build an extension in the back of the building allowing bigger works to be shown.